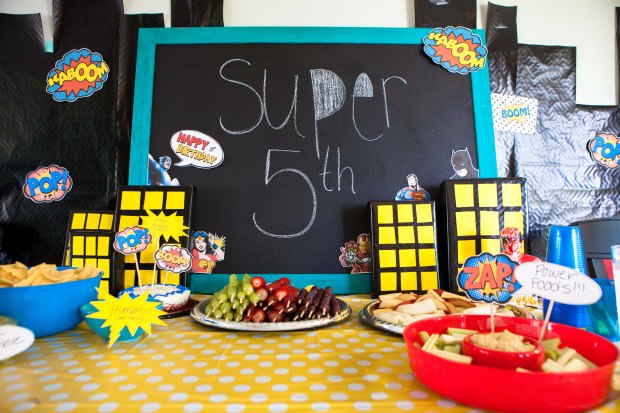 Chase’s ‘Calling All Superheroes’ birthday party was a blast! We asked his friends to dress up as some kind of hero and we had everything from Mr. Incredible to Ninja Turtles, Bat Girls, Super Men, Etc..

Each year I plan the party based upon what the birthday kiddo is interested in (with the exception of their first birthday). Two years ago when I asked Chase what kind of birthday party he would like, he chose Disney-Pixar’s Cars. I remember being momentarily tempted to sway him towards Superheroes so I could throw him a Super Hero birthday party. I’m so thankful I didn’t because this happened naturally this year and it made it that much more fun (because in case you haven’t noticed, he’s REALLY into superheroes and heroes in general.) Normally we are on a limited budget for parties, this time was actually even more tight than ever before so I had to be especially thrifty. I’ll put little notes with pictures for those interested in doing a superhero party in the future :) Here are some pictures from the day.

Confession of a party-planning-lovin’ momma: When it comes to parties – I LOVE THEM. I love planning them, picking out games, colour schemes, etc. I just have a lot of fun putting parties together, However, a little secret, when it comes to the food part – I really don’t like any part of it. I get SUPER lazy. I get overwhelmed thinking about baking the day before or of the party. So I don’t. I usually either ask my friend Chey to bake and decorate a cake for me, OR I go to the grocery and pick up pre-made cupcakes (remember the Jake party last year) or pre-made cake and add my own decorations. 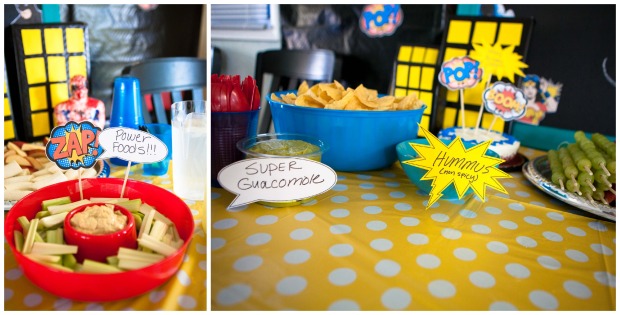 You can find TONS of super hero style printables online! I just went on pinterest and picked out those that matched our Comic style Super Hero party. I saved boxes over the past couple months and covered them with $4 black wrapping paper. I cut out little “windows” from yellow construction paper and taped them on.

(iphone pics – thank you Teri for capturing the one of Everly … and for holding her!)

I found this awesome polkadot tissue paper at walmart for almost $2 and used that to decorate as well. I also found superheroes, like Thor here, online here.

(Chase requested I dress like Wonder Woman. So I did. Even though the juniors shirt arrived and was WAY too tight. LOVE YA KIDDO! hehe)

One of the funnest parts of parties are the games. We made a superhero obstacle course that if the kiddos completed, they earned a certificate and a medal (free printable I found online and I got the medals in a pack from the Dollar Tree!)

“Hulk Smash” station – I went to purchase Hulk hands online and I just couldn’t handle the $20 price rag. I was SO thankful when I found inflatable Hulk hands at The Dollar Tree!! I spend $2 instead of $20+. Hooray! (They also have A LOT of superhero themed things at The Dollar Tree. I really could have gone out of control. Check it out if you have little Superheroes running around)

The “bricks” are also boxes we had that i wrapped in $4 red wrapping paper and drew on with a sharpie marker. You could use tissue paper but I think the wrapping paper is more sturdy for the little Hulks that plow through the boxes. 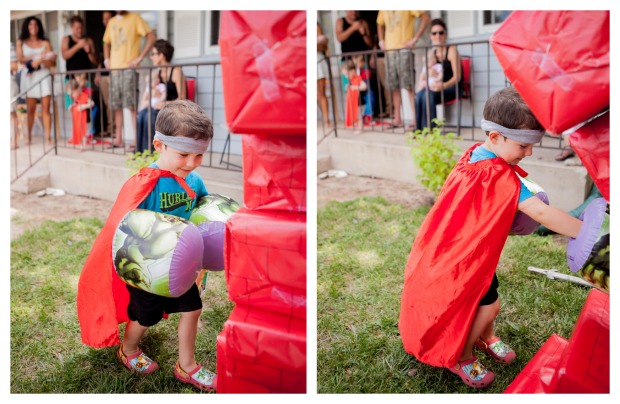 The kiddos then had to run to The Superman Speed Practice and put on a cap and mask as fast as they could (I think this ended up being difficult for most of the kids so they just had them spin around 3 times with the mask on :))

The kids would then enter a tunnel on the Gotham side …

and come out the other on the “Spiderman” side. 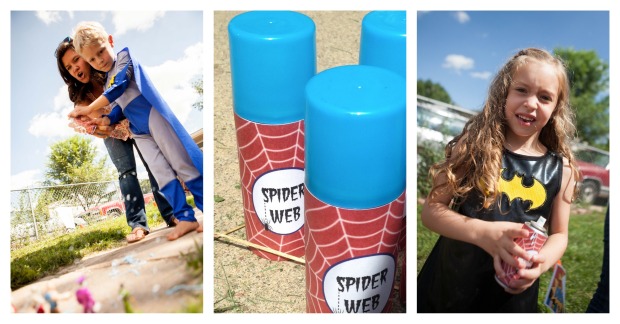 They would then grab this “Spider Web” spray (also from the Dollar Tree and with a free printable from pinterest) and spray toy villains we had lined up for them. 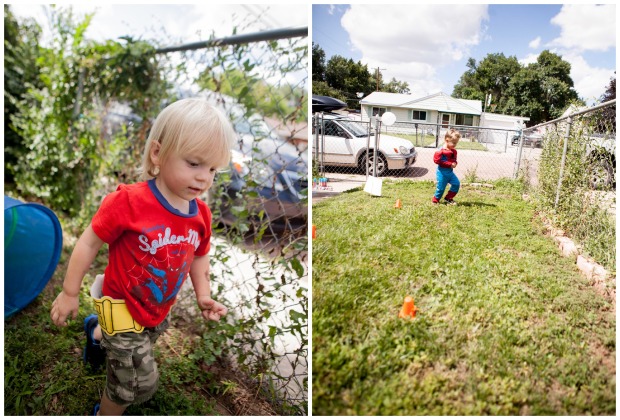 Finally, the kids had to complete a “Flash Dash” where they ran as fast as they could through cones we had set up. 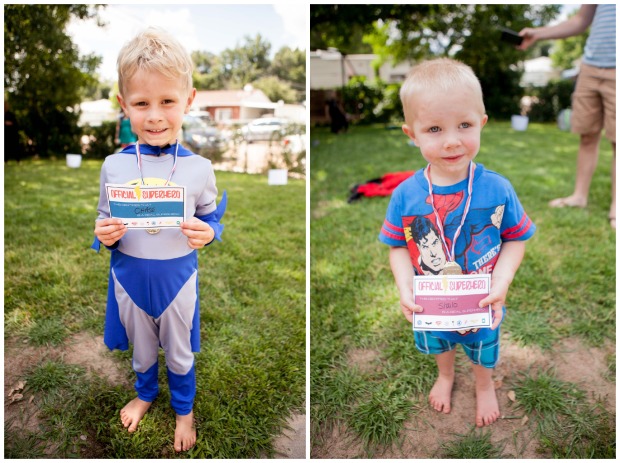 Once they finished they received their Official Superhero certificate and medal :)

We also played a game where the kids had to free the superheroes from ice. I froze 4 figures just the night before (in tupperware) and pulled them out just before the game. (I ran them under hot water to free the ice cube from the tupperware)

I filled spray bottles with hot/warm water and let the kids “save them”. It was a hit!

Cannot believe my boy is 5!